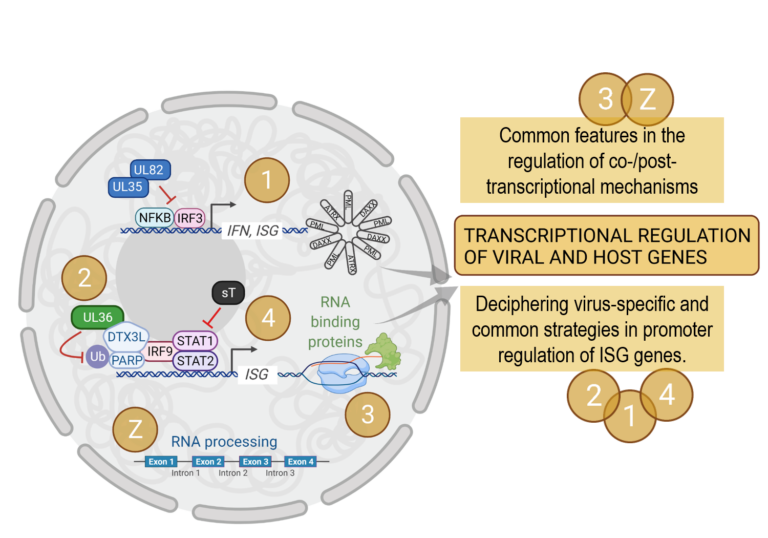 Research of the Brinkmann group has revealed several novel interactions of herpesviral proteins with the innate immune response with a focus on the gamma-herpesviruses Kaposi’s sarcoma-associated herpesvirus (KSHV) and murine herpesvirus 68 (MHV68), and the beta-herpesviruses MCMV and HCMV. The group has profoundly contributed to the knowledge on how herpesviruses modulate the antiviral type I IFN response to secure chronic infection and could show that herpesviruses can even exploit the PRR-mediated immune response for their own benefit. They identified the tegument proteins UL35 and M35 of HCMV and MCMV, respectively, as novel type I IFN antagonists. Both act downstream of the pattern recognition receptors (PRR) cGAS and RIG-I, but upstream of the IFNAR. The work proposed within this RU (P01) builds on this research. Preliminary results suggest that both M35 and UL35 directly act on type I IFN transcription in the nucleus and that the UL35 protein cooperates with the tegument protein UL82 to elicit its antagonistic activity in the nucleus. Interestingly, new data suggest a role of promyelocytic leukaemia nuclear bodies (PML-NB) for UL35- and UL82-mediated suppression of type I IFN transcription, a link that will be explored in detail in the framework of DEEP-DV.

The Dölken group successfully applied systems virology approaches to define mechanisms, which regulate transcription and translation during HSV-1 and MCMV infection at single- cell resolution. This expertise on integrative functional genomics was recently exploited by the collaborations of the Dölken and Erhard groups to re-analyze existing genome-wide datasets on HSV-1. Thereby, the number of HSV-1 genomic elements was significantly expanded with a more detailed knowledge on HSV-1 genomics, transcriptomics and proteomics. The group could recently show that the induction of interferon-stimulated genes (ISGs) in the very early infection phase with MCMV results from the activation of transcriptional bursts in so-called non-permissive promoter elements. The regulation of the type I IFN response downstream of the IFNAR at very early times in infection by the HSV-1 tegument protein UL36 has been the subject of preliminary work that will be investigated in detail in DEEP-DV (P02). UL36 binding to the cellular deubiquitinylase complex DTX3L/PARP9 and putative prevention of ISG promoter activation by interfering with the transcription factor complex ISGF3 (composed of the transcription factors STAT1, STAT2, and IRF9) is the main focus of this project.

With the Landthaler group, DEEP-DV integrates expertise in single-cell transcriptomics and RNA biology. The group focuses on RNA transcription and gene expression mechanisms and has a profound expertise in RNA technologies aimed at the identification of regulatory RNAs and RNA binding proteins (RBPs). Using such techniques, the group investigates the functional importance of non-coding RNAs and RBPs for the regulation of viral and host gene expression. Initial experiments investigating the role of RBPs early in HSV-1 infection showed an increase in RNA binding affinity of several RBPs of viral as well as host origin. The comprehensive identification of RBPs in HSV-1 infection, the confirmation of some highly interesting RBPs, whose RNA binding property changes upon infection, and their functional characterization in 2D and 3D cell culture models are the subject of the Landthaler group’s project within DEEP-DV (P03).

Similar to P02 (Dölken/Erhard), the Fischer group is interested in the regulation of the transcription factor complex ISGF3 and ISG induction in human polyomavirus (hPyV) infection. The group has profound expertise in high throughput sequencing, metagenomics, infection models, and pathogenicity mechanisms of small DNA tumor viruses, especially regarding the clinically relevant hPyV members BKV and MCPyV. Recently, the group successfully demonstrated that hPyVs persistence can be recapitulated in cell culture models. This persistence is independent of reinfection and requires miRNA-mediated balancing of Large T-antigen (LT) expression levels. LT is essential for viral replication, but the protein is also immunogenic and can induce cellular senescence in certain cell types. The DEEP-DV project P04 addresses the mechanism how LT contributes to viral persistence, and how persistently infected cells may evade immune recognition. Here, the group builds on preliminary data suggesting regulation of the type I IFN response by small T-antigen (sT), another early viral gene product. Genome-wide transcriptional and gene regulatory data together with first mechanistic insights suggest that sT-induced immune evasion specifically affects ISGF3 regulated genes.