The five groups in RA2 complement each other in their expertise and preliminary work on the role of repressor complexes, chromatin remodeling and compartmentalization during infection with KSHV and VZV (Kaposi’s sarcoma-associated herpesvirus and Varizella zoster Virus, P05), HHV-6 (Human herpesvirus 6; P06), HCMV (P07, P09), and HAdV (Human adenovirus; P08). 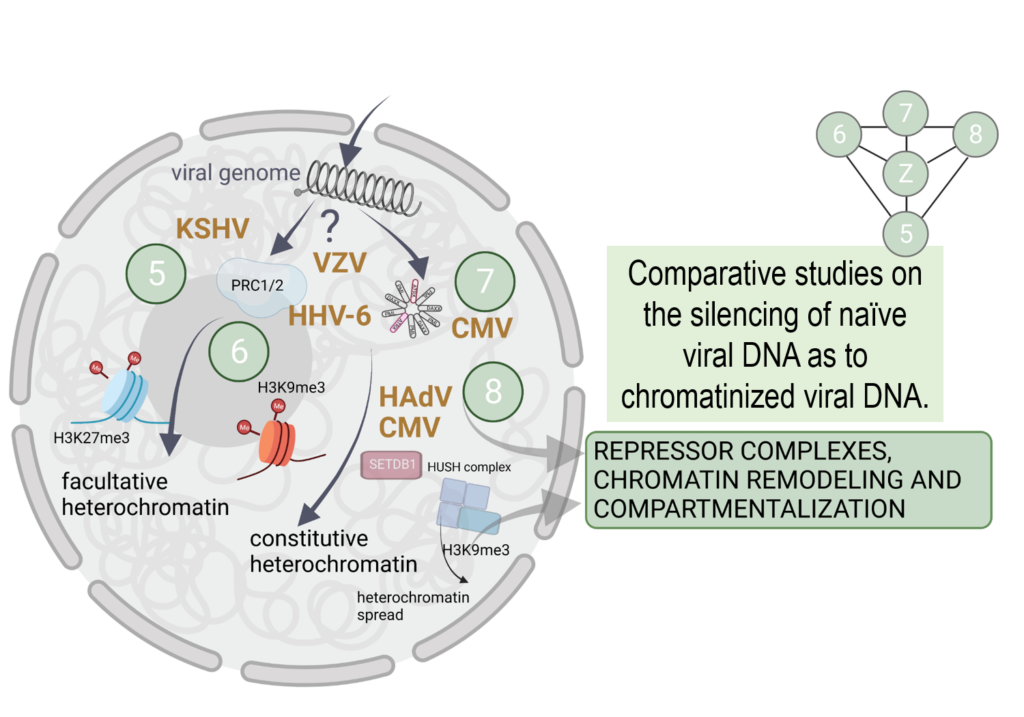 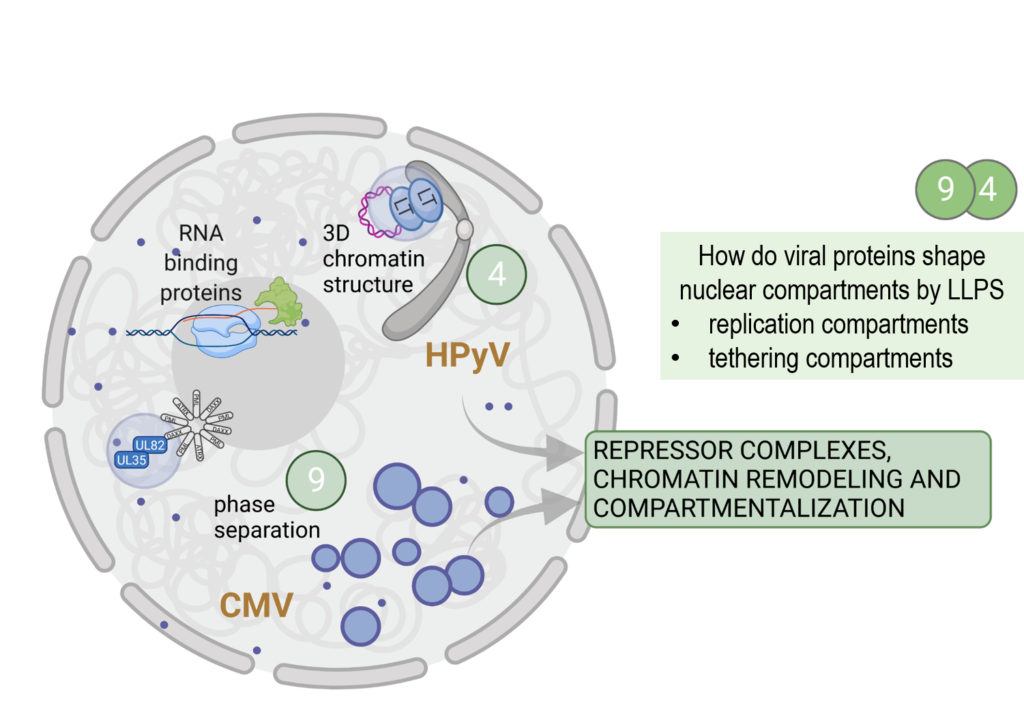 The Grundhoff group routinely employs genome-wide, systemic approaches to investigate epigenetic silencing of herpesviral chromatin during latent infection . The group has a long-standing interest in the mechanisms controlling herpesviral latency of the gamma-herpesviruses Epstein-Barr virus (EBV) and KSHV. Their study showing that latent KSHV episomes globally acquire H3K27me3, a histone mark associated with polycomb repressive complexes (PRC) and facultative heterochromatin, was the first to use genome-wide analysis tools to investigate herpesvirus chromatin states. In more recent work, they used comparative approaches to demonstrate that the presence of a high-density of unmethylated CpG motifs in de novo infecting genomes triggers rapid acquisition of PRCs via the so-called non-canonical recruitment pathway. Hence, KSHV may specifically exploit host responses to epigenetically naïve DNA to allow establishment of viral latency. Importantly, as the many herpesvirus genomes exhibit very high CpG densities, these results also suggest that the above may represent a commonly used exploitation strategy. To further investigate such models and clarify the role of PRCs during herpesvirus latency, the Grundhoff group will join forces with the Viejo-Borbolla group, a group with extensive knowledge on the alpha-herpesvirus VZV. The Viejo-Borbolla group developed latency/reactivation models for VZV employing induced pluripotent stem cells (iPSC)-derived human neurons and gene editing techniques to modify the iPSC and VZV genomes. The collaboration with the Grundhoff laboratory resulted in the thorough characterization of the transcriptome of the derived human neurons (unpublished) and triggered the investigation of the epigenetic modifications imposed on VZV that will be investigated here. By using alpha- and gamma-herpesviral infection systems, the two groups will jointly address the molecular mechanism(s) that allow the establishment of transiently repressed chromatin during latency (P05).

This focus within DEEP-DV is complemented with two additional research groups, the Kaufer and the Stamminger group, who concentrate on different forms of latency in beta-herpesviruses. The Kaufer group’s research focuses on the establishment of HHV-6 latency, during which the virus genome integrates into the telomeres of host chromosomes. The group has a long-standing interest in the mechanisms that govern telomeric HHV-6 integration, and those that may lead to transient or permanent transcriptional repression of integrated genomes. Recently, the group successfully applied whole genome optical mapping to shed light on the genetic structure of the highly repetitive locus harboring the virus genome. Contrary to previous assumptions, the HHV-6 genome is centered within the telomeres, and the chromosomes harboring HHV-6 were found to have telomere lengths comparable to chromosomes without the virus genome. Furthermore, initial descriptions of the chromatin indicated a repressed chromatin status of the integrated viral HHV-6 genome with histone marks representative of constitutively repressed chromatin (H3K9me3) and facultative heterochromatin (H3K27me3). This implies that different epigenetic marks are present on different genomes with the consequence that only some genomes can be re-activated. These results will be followed up within DEEP-DV in P06 on a single-cell level thereby addressing to what extent the transcriptional status of the cell is crucial for genome integration and repression.

Complementing the viral latency models investigated in P05 and P06, the Stamminger group uses infection models, which will permit the study of HCMV latency, but also investigates viral silencing mechanism upon infection of permissive cells in order to detect commonalities. This group was the first to demonstrate that PML-NBs act as important cellular restriction factors against herpesviruses. Moreover, they were able to clarify important mechanisms of viral counteraction by solving the crystal structure of the cytomegalovirus IE1 protein demonstrating that this PML-NB antagonist acts as a TRIM factor decoy. The group acquired an internationally recognized expertise in PML-NBs and could demonstrate that these structures co-activate the interferon response. Over the years, the group has studied numerous components of PML-NB, such as PML, Sp100, ATRX, DAXX, and their function in the repression of viral infection. This expertise is used in the context of their project in DEEP-DV to investigate the role of PML-NB components and the cellular chromatin associating factors SPOC1, KAP1, and components of the HUSH complex at the single-cell level on the initial events silencing HCMV infection (P07).

The Schreiner group has a strong interest in the role of chromatin binding factors, including components of PML-NBs, as regulators of early DNA virus replication. Her group has significantly contributed to the identification of cellular restriction factors in HAdV infection, including ATRX, DAXX, SPOC1, and KAP1. The achievements of the Schreiner group provide a model by which adenoviruses and other DNA viruses antagonize the intrinsic antiviral restriction factors via a variety of mechanisms, including exploitation of the host SUMOylation system. The group’s recent work shows that SUMOylation within viral replication centers results in the loss of PML-NB integrity and constitutes a novel determinant involved in inhibition of epigenetic readers and subsequently inhibition of viral chromatin condensation. Within DEEP-DV, the Schreiner group will build on their previous findings and analyze the role of cellular PML-NBs and chromatin binding factors such as SPOC1 and KAP1 in recruiting the HUSH complex to adenoviral genomes early in infection. Furthermore, the group addresses the contribution of incoming viral proteins such as the viral core protein pVII to shape the cellular milieu to ensure viral DNA transcription (P08).

The Bosse group with expertise in advanced imaging technologies in virus infection rounds up the portfolio of DEEP-DV by contributing additional methodology allowing the focus on single-cell states and their contribution to early viral and host gene expression. The project of the Bosse group builds on initial results on the importance of phase separation for the establishment of HCMV DNA replication. In preliminary work, the Bosse group demonstrated that the HCMV-encoded proteins UL112-113 possess properties of phase separation proteins and that these characteristics are essential for the establishment of viral replication centers. His group plans to extend these findings and address the question to what extent such virally induced liquid droplets selectively recruit pro-viral factors from PML-NBs (P09). This is of significant interest beyond CMV, as many DNA viruses, including members from the PyV and adenovirus families, establish their replication centers in close proximity to PML-NBs, suggesting that dependency on PML-NBs for early replication onset may represent a common feature. Hence, in addition to providing important technologies for multiple members of DEEP-DV, this project adds a novel layer/aspect of transcriptional regulation that can be transferred to other projects of this RU.